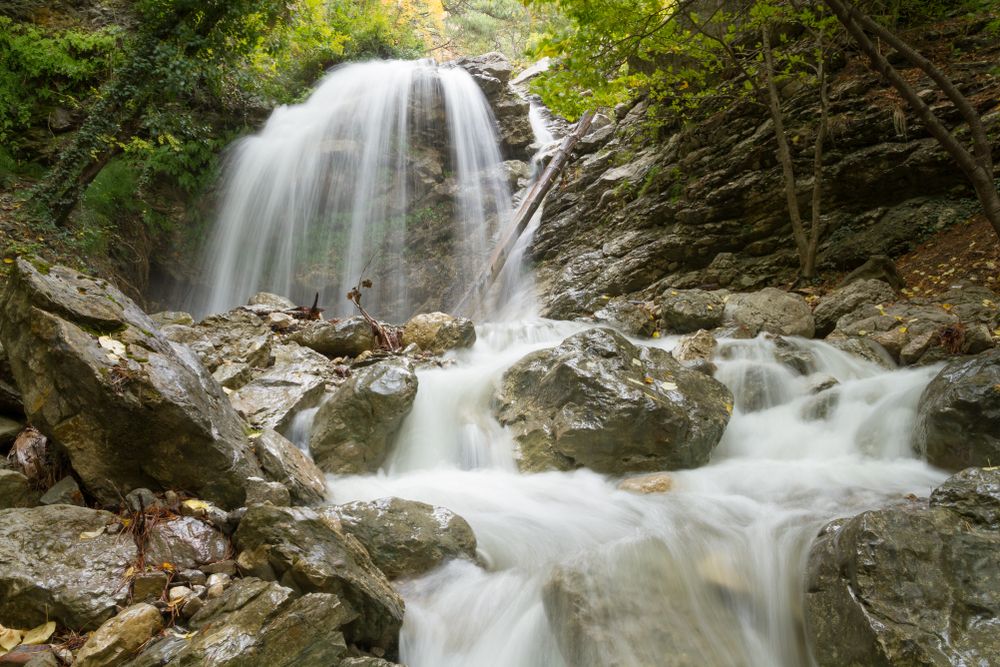 Top 10 Sights to See in the Crimea.

Crimea is a sought-after destination among tourists. Visitors love this place for its good climate, the beauty of the mountain scenery and, of course, the Crimean sights. One vacation is not enough to visit all the famous places of Crimea.

It is a Gothic castle located at a height of 40 meters. The most visited place in the Crimea. Tourists recommend seeing the castle from the sea. It evokes fabulous and mystical associations, and to some it reminds of the famous Hogwarts from Harry Potter. The movie "Ten Negroes" brought a lot of popularity to the place. Workers are currently reinforcing the rock, as it is gradually collapsing under the weight of the castle.

The height of the waterfall is 15 meters. It translates to "water-water" in Armenian. It is located in a gorge at an altitude of almost 500 meters above sea level. Some tourists dare to take a dip in the cold water, called the font of beauty, health and love.

A natural attraction of the Crimea – Dzhur-Dzhur waterfall

The height of this famous Crimean sight is 1234 meters. A climbing tourist has a picturesque view of the bays of the Black Sea and Yalta. In Greek it is translated as "Saint Peter". You can get to the top by cableway, on foot or by car. Bold tourists can visit the hinged bridge over the gorge. 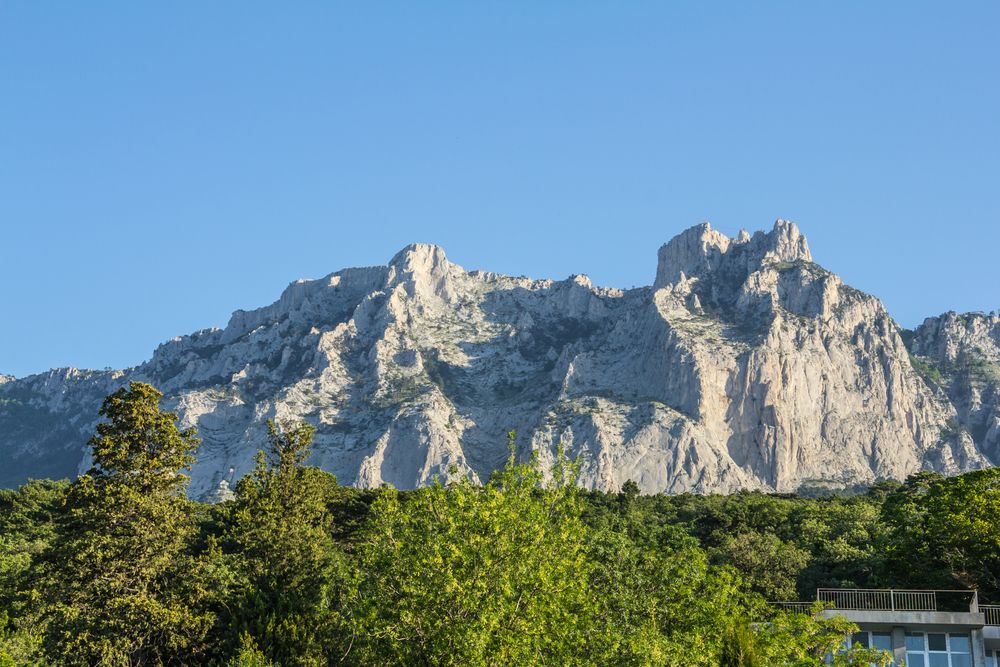 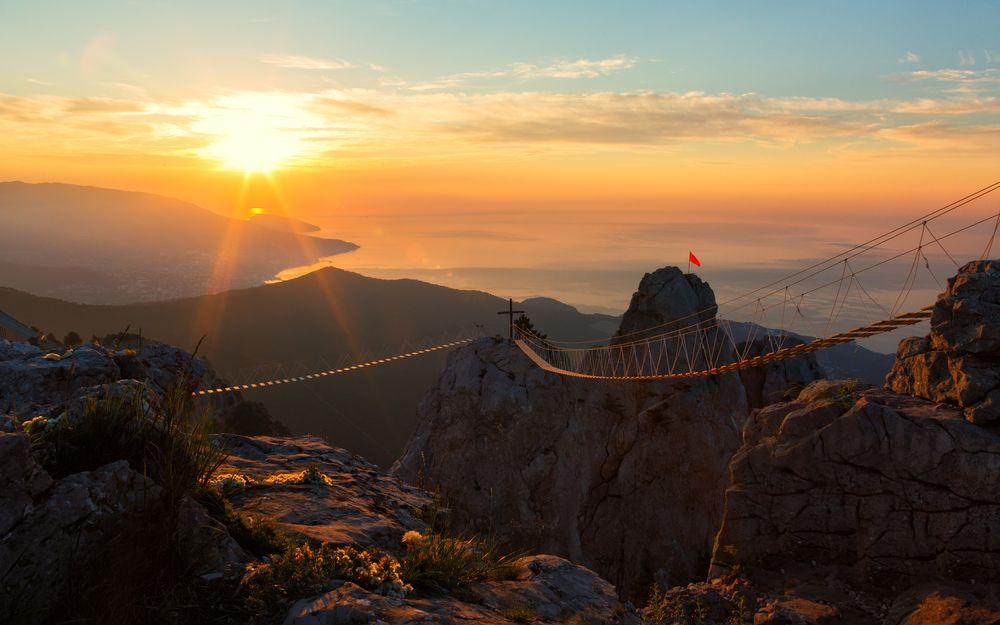 The bridge on top of the mountain Ai-Petri

On the territory of Sudak is located this historic complex, which was built by the Italians as a stronghold of the colony. The fortress is situated on the ancient coral reef and occupies about 30 hectares. Now it is a museum-reserve, which holds a variety of exhibitions and seminars. A picturesque view.

The Genoese fortress in Sudak

This is the property of Alexander III, which is like a French residence during the Renaissance. In the palace there are a lot of things from those times, like mahogany furniture, mirrors, fireplace, etc. The area is decorated as an ancient garden with many sculptures. A great place for memorable photos. Here tourists can taste Massandra wines. 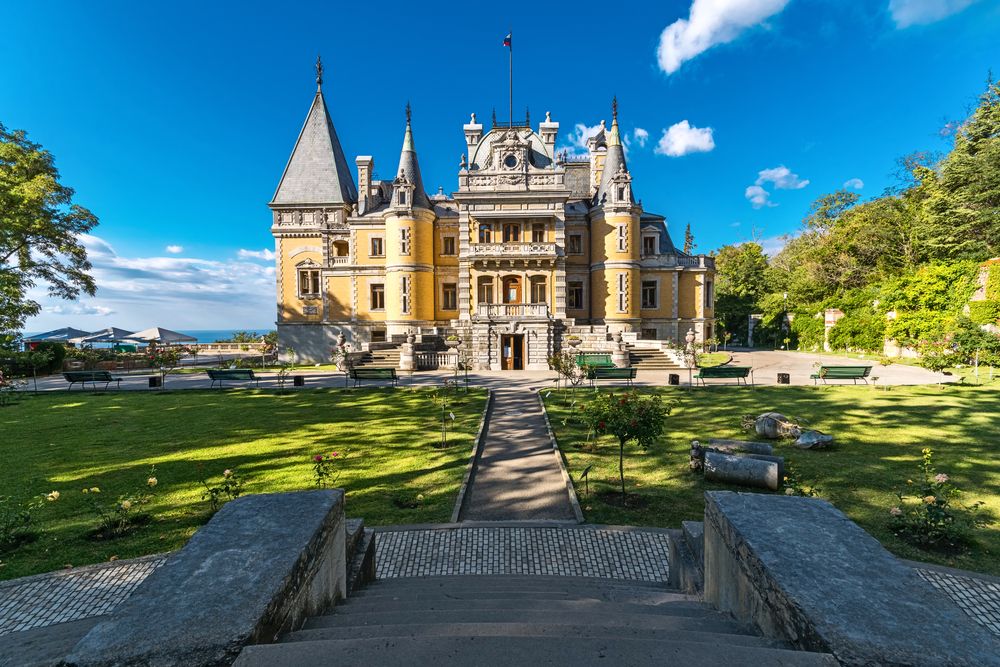 The mysterious place with stone sculptures and unusual reliefs, which was created by nature itself. Many tourists associate this place with mysticism. The sight is famous for the film "Prisoner of the Caucasus. 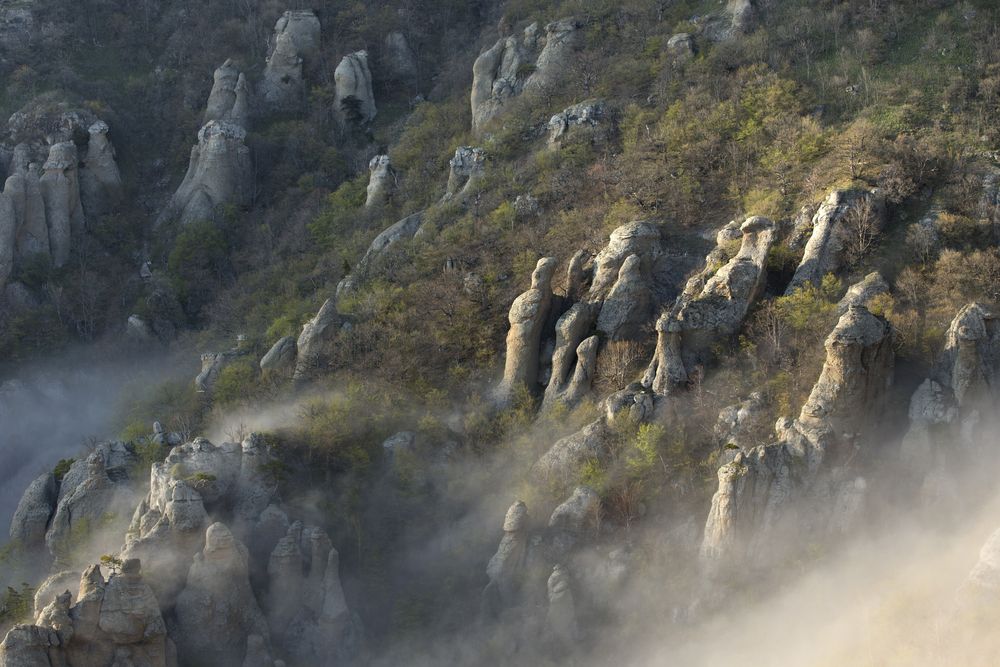 The mysterious place on the slopes of Demerdzhi mountain

This is a Crimean monument that attracts people of arts and sciences. Tourists can walk through the ancient streets, see churches, and watch a performance in an ancient theater where gladiatorial fights used to take place. 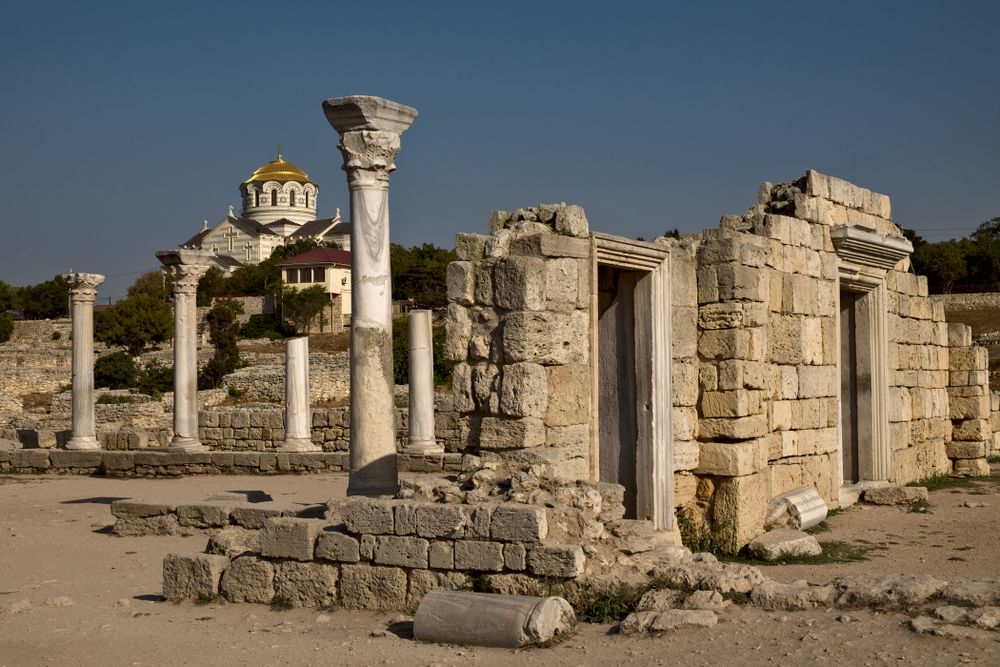 Chersonesos is a popular sightseeing site in Sevastopol

A cave town at 558 metres high, which was once a Byzantine fortress. Tourists can see caves preserved from ancient times, the three remaining streets, palaces, mosques, even residential estates. 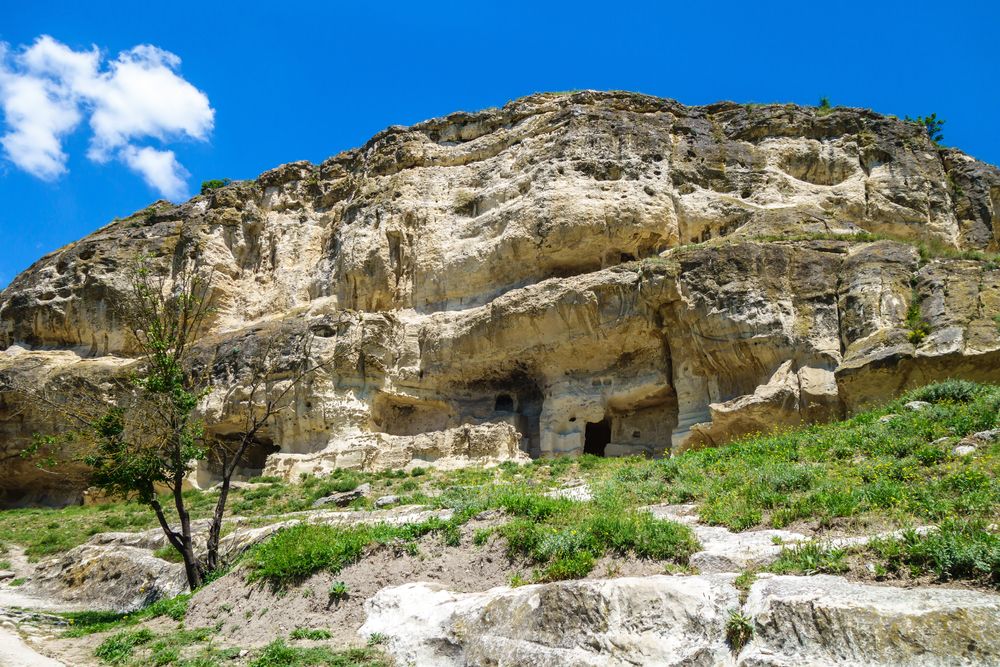 A sample of landscape architecture, built in 1812. Here you can see a variety of plants from all over the world. There are more than 1000 species. The huge territory is served by about 500 employees. Each year there is a ball of chrysanthemums, and the garden itself is visited by 300 thousand tourists annually. 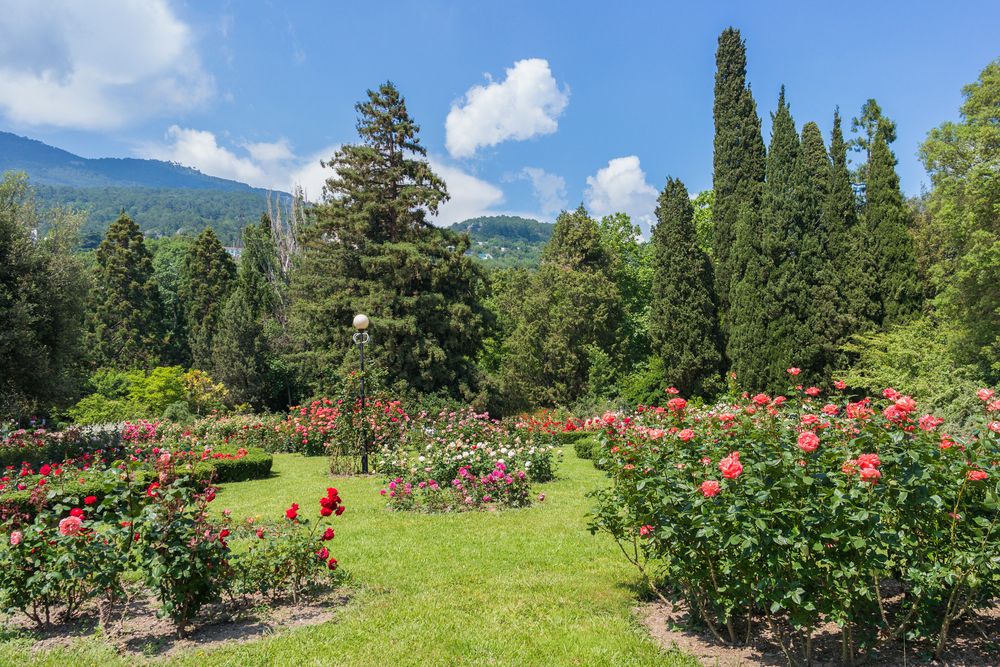 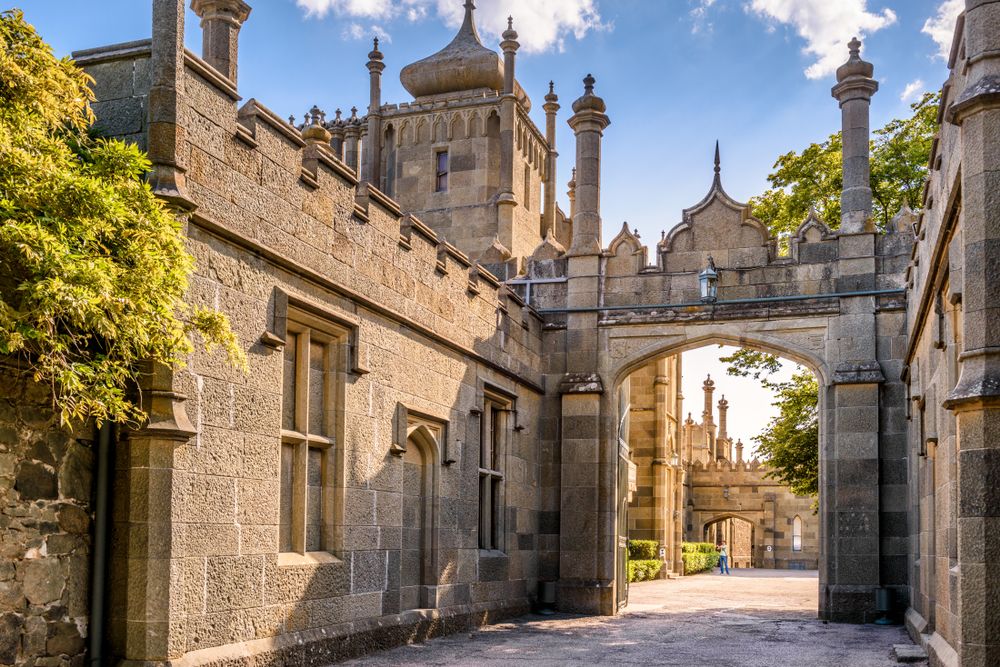 Of course, this is not a complete list of places of interest in the Crimea, but only a small part of them. The Crimea is beautiful, and everyone can find a place to his liking!